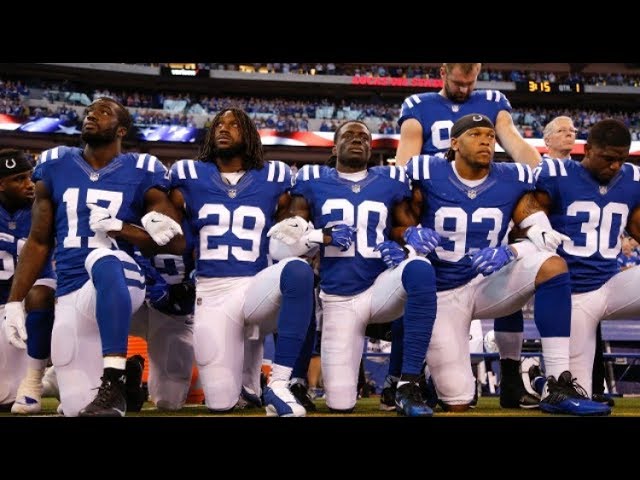 The national anthem protests by NFL players have caused a great deal of controversy. The protests began in 2016, when then-San Francisco 49ers quarterback Colin Kaepernick knelt during the anthem to protest police brutality and racial inequality. Other players soon followed suit, and the protest spread to other teams and leagues.

However, the protest took on new meaning in 2017 after President Donald Trump said that players who knelt during the anthem should be fired. Since then, the protests have been seen as a way to defy Trump and his policies.

Despite the controversy, the protests have continued, with some players taking a knee and others raising a fist during the anthem. Here is a look at how the national anthem protests have unfolded since 2016.

In 2016, then-San Francisco 49ers quarterback Colin Kaepernick caused a stir when he decided to kneel during the playing of “The Star-Spangled Banner” before NFL games. His rationale for doing so was to bring attention to racial injustice and police brutality in the United States.

Other players soon joined Kaepernick in kneeling or raising a fist during the anthem, prompting some fans and even President Donald Trump to voice their displeasure with the protests. The issue came to a head in 2017, when the NFL implemented a rule requiring all players on the field to stand for the anthem or stay in the locker room.

The rule was met with immediate backlash from players and eventually rescinded, but the kneeling controversy continues to be a polarizing issue among both fans and those involved in the league.

Why Did It Happen?

“I am not going to stand up to show pride in a flag for a country that oppresses black people and people of color,” Kaepernick told NFL Media in an exclusive interview at the time. “To me, this is bigger than football and it would be selfish on my part to look the other way. There are bodies in the street and people getting paid leave and getting away with murder.”

Other NFL players soon joined Kaepernick in his protest, but it didn’t really gain widespread attention until September of 2017, when President Donald Trump criticized NFL players who knelt during the anthem.

“Wouldn’t you love to see one of these NFL owners, when somebody disrespects our flag, to say ‘Get that son of a bitch off the field right now?'” Trump said at a rally. “Out! He’s fired! He’s fired!”

After Trump’s comments, hundreds of NFL players knelt or sat during the national anthem in Week 3 of the 2017 season as a way to protest Trump’s remarks. Since then, there have been sporadic protests by players during the anthem, but no league-wide protests like there were in 2017.

Many NFL fans have voiced their opinion on the matter, and some have even stopped watching the games altogether. However, it remains to be seen what effect, if any, the protests will have on the league in the long run.

After a divisive 2017 season in which players across the NFL knelt or remained in the locker room during the national anthem to protest social injustice, it’s unclear what will happen this season.

The league has said it will not force players to stand for the anthem, but it has encouraged them to do so. President Donald Trump has been critical of the protests, and he has said that players who kneel should be fired.

Some players, including two-time Super Bowl champion Malcolm Jenkins of the Philadelphia Eagles, have said they will continue to protest in 2018. Others, like Miami Dolphins wide receiver Kenny Stills, have said they’re still deciding what they’ll do.

It’s possible that we’ll see more protests this season, or that the issue will fade away as other topics take precedence. Either way, it’s sure to be one of the most closely watched aspects of the 2018 NFL season.